I recently shot the 2013 Pirates of Texas Carbine Match in Corpus Christi Texas. A Carbine match is a rifle only match consisting of some long range (typically out to 100 yards) and some CQB stages with targets ranging in "Up in Your Face" to less than 100 yards... BTW, those are my favorite. This math was a single day format which mean all stages were shot in one day. There was seven stages all together and I ran into issues on my first stage. My Blackthorn custom rifle that I built (link at the bottom) in my YouTube videos was doubling on me. Its my own fault due to how I place my finger on the trigger. I was threatened to be DQ'd (Disqualified) if I did not resolve the issue. I ended up borrowing a lower from one of the match organizers and shot the rest of the match with it. 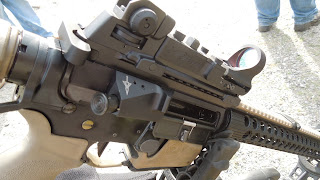