If you are familiar with my horror story on my Chiappa M9-22 you will be glad to know I have found a replacement. Not going to the Shot Shot makes it tough for me to search out new and interesting guns. So when a fellow youtuber told me about the Beretta M9-22 pistol, I had to take a look. Within 10 minutes of reading the specs and seeing probably the only video online of the gun (a useless video of the creator rambling and providing no real true info on the gun), I bought one from Buds GunShop. You can see my more in-depth video on this gun HERE (A MUCH BETTER VIDEO I MUST SAY) as well as some detailed pictures of this rimfire and the center fire version below. 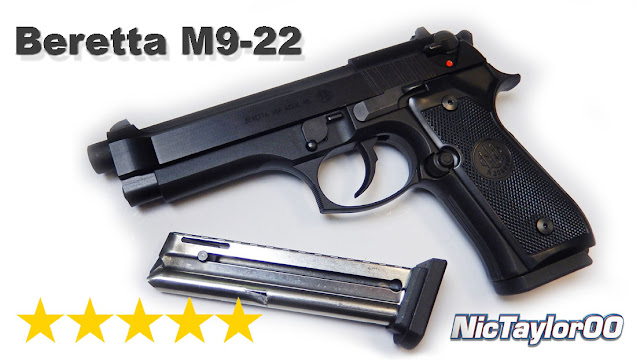 When my M9-22 arrived I was immediately impressed. It felt exactly like my Beretta 92f 9mm pistol that I use in Production Division to shoot USPSA matches. If you have not seen USPSA or IPSC style shooting you can see some heart pounding first person shooter video on my YouTube channel. Anyway, right out of the box, the pistol felt the same in my hands with the exception of a few missing ounces in weight. Additionally the trigger feels the same with no changes in geometry. The decocker works just like any other but is a bit harder to disengage. It's unclear if it is just stiff due to the newness of the parts, or if its plastic construction has more friction than the metal parts found on the 9mm version. Either way, the controls work exactly the same. The take down lever works in the same manner as the 92 series pistols separating the slide, barrel and recoil spring from the frame. Different from my 92f 9mm model is a captured recoil spring with a plastic guide rod on the M9_22.

The gun itself is not made by Beretta, but made by Umarex who makes many other 22 clones, like the Colt 1911-22 and Smith & Wesson M&P22 pistols. My gun came with one 15 round magazine. I deem this a High Capacity mag since most .22lr pistols have only 10 round factory mags and require special UPGRADE KITS to get additional rounds in the magazine. At the time of this article, finding replacement magazines for the M9 22lr pistol might be challenging but we found some HERE.

Also a very note worthy aspect of the mags, or rather how the magazines fit into the frame of the pistol... If you shoot many rim-fire pistols you know how delicate the insertion of these magazines can be when putting one in the gun. The narrowness of the magazine in conjunction with the opening in the butt of the pistol make inserting a mag less fluid than with a center-fire pistol. The M9-22 does not have this problem. The 92 series pistols have a rather large pistol grip to accommodate the double stack magazines and this 22 version is nothing different. However, Beretta has made what I like to call an internal magwell inside the pistol grip. When looking at the opening for the magazine, it almost looks as if a full sized double stack magazine might fit but the opening narrows down quickly like funnel. This funnel or internal magwell allows this shooter to insert a fresh magazine much more quicker than traditional 22 pistols. 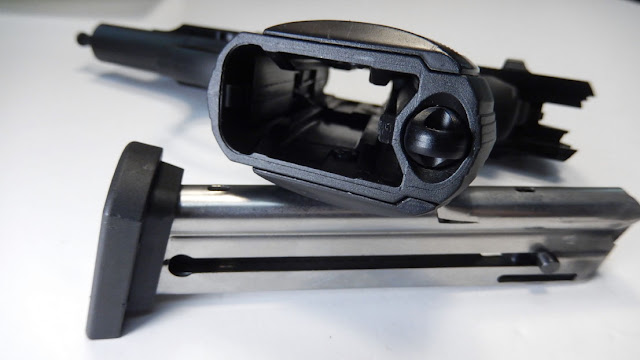 Sights on the M9-22 are just like what came on my 92f way back in 1989, a plain and simple 3-dot system. Just like my 9mm version, my new 22 caliber M9 would not hit for me. Mine shoots low and even after putting on a shorter front sight (the gun came with two front sights of different heights), mine still shot low. I guess my only option is to fit it with an adjustable rear sight or file down one of the plastic front sights. 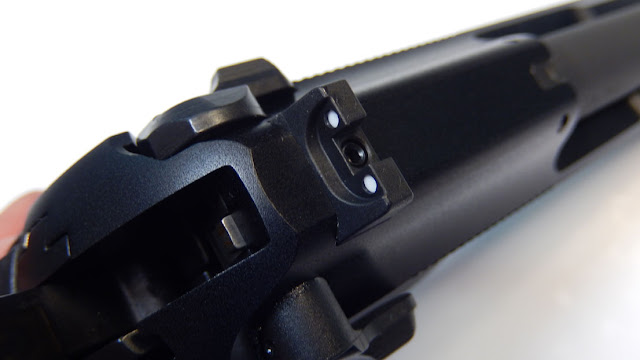 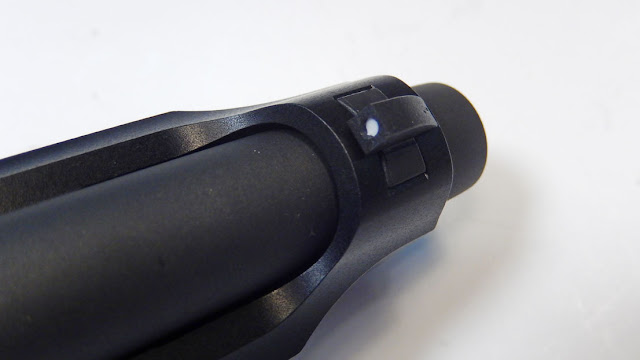 At a quick glance the internals look very similar to the centerfire models but I'm sure they are not interchangeable. You can not put a 22 slide on a 9mm frame and vice versa. The barrels can not be switched between guns and the trigger can not be swapped. I'm sure that was done for safety reasons but I find the similarities between the 22 version and 9mm version the coolest. Even though the parts are not the same, it's clear that Umarex closely followed the 92 series design. 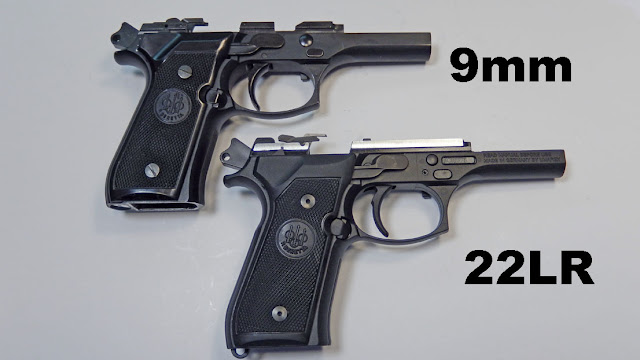 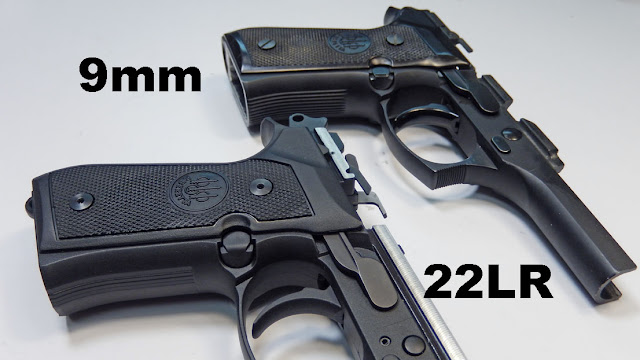 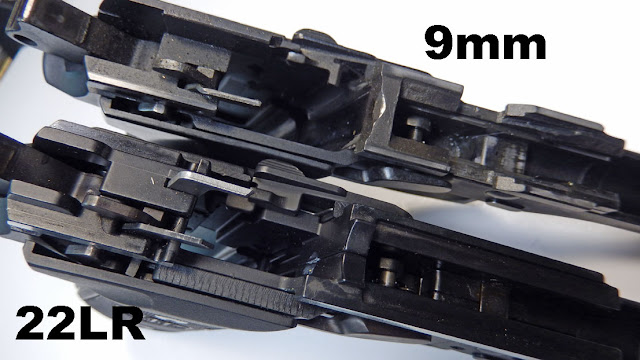 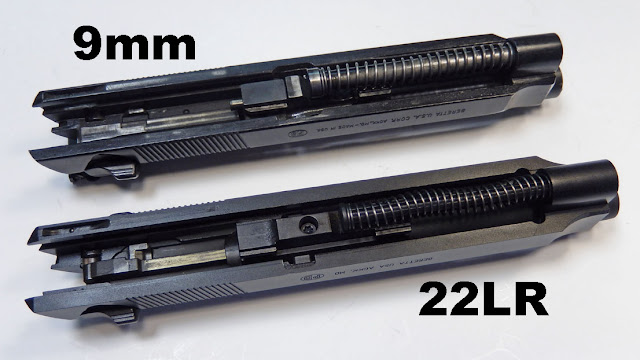 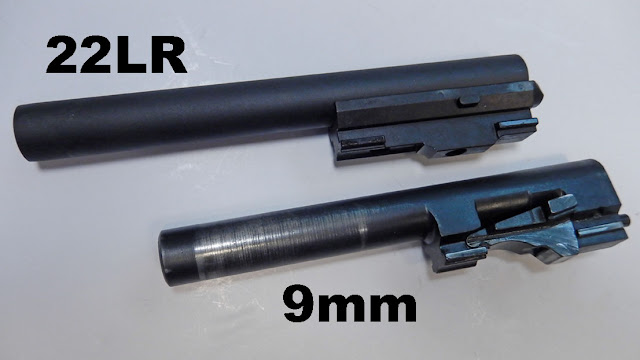 Another cool feature of the M9 22lr is that the grip panels are interchangeable with centerfire panels. This is a good thing since my 22 pistol came with what I can only assume was lesser quality plastic grips. Yes they were branded with the Beretta logo and all but the trigger bar spring on my gun that sits behind the right hand grip pushed my grip out and away from the gun. This created an unsightly gap that was quickly fixed by putting on an old pair of plastic grips I had sitting around. It should be noted if you plan to "bling up" your M9 with some after market grip screws, they appear to NOT be standard to the normal 92 series pistols. So you may need to find (if you can) some screws that are specifically for the 22 version. 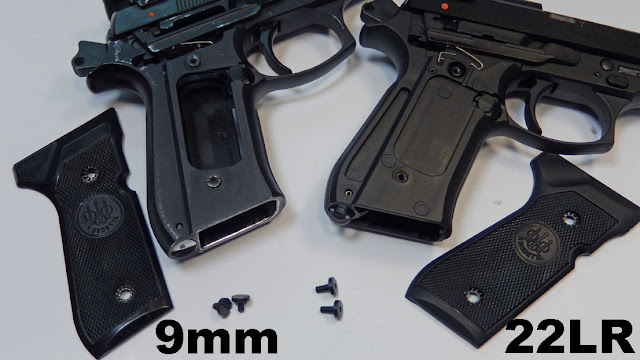 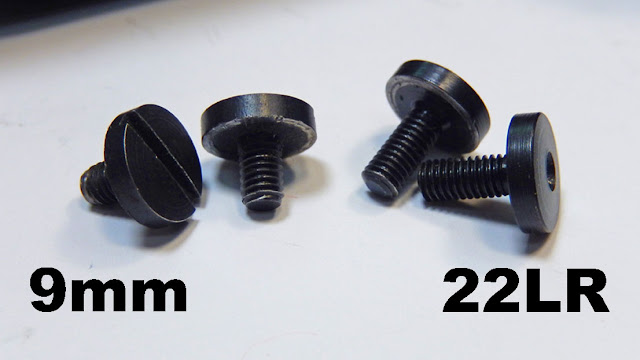 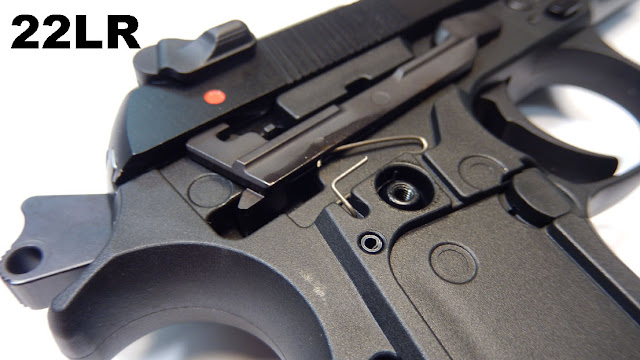 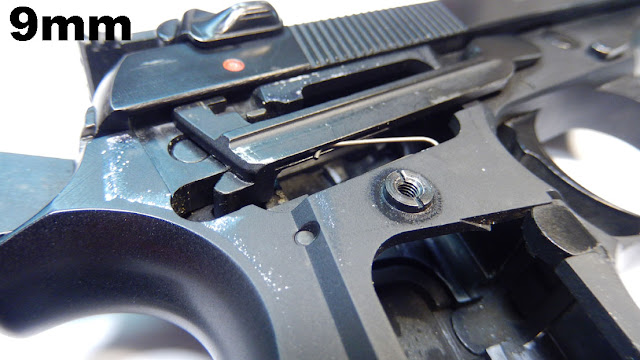 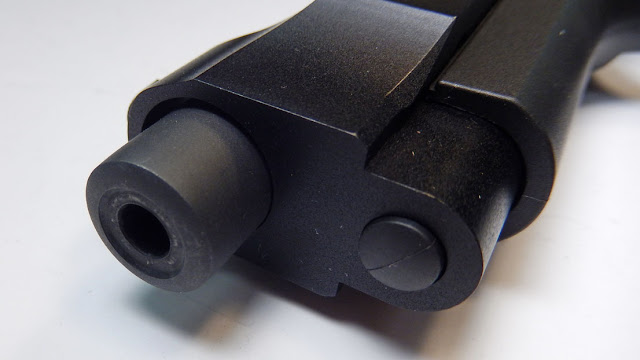 My pistol shot everything I put it in from inexpensive bulk ammo to the high dollar CCI Mini Mags. Only failures was a couple of misfires with the bulk ammo where the round failed to go off when the hammer fell. This is easily fixed with the pull of the double action trigger with the hammer down on the dud. The second pull of the trigger set off the rounds. Having the ability to pull the trigger again on a dud is a great big positive for me since I love to shoot the least expensive ammo I can find. My only regret is that my gun does not have a threaded barrel for a suppressor. Hopefully that will be an upgrade offered in the near future. Aside from my love of the Beretta 92, this is one of the best 22 pistols I have run across in a very long time.