While doing some video editing from my 2012 Texas State Limited videos, I saw one of my squad members in my field of view of the camera. In this screen shot from the POV camera I was using, you can see that he is pretty much "down range" of me. Now as a shooter I can tell you that I feel the most comfortable at the range at these IPSC shooting matches. I know that all of my fellow shooters are very safe and have pretty good gun handling skills. I feel much less safe at the public ranges. Too many times I've seen just plain dangerous gun handling by the casual shooter at the public range. BUT, even though competitive shooters are safe, accidents can happen. So when you are watching a fellow shooter burn down a stage, make sure you are directly behind them and expect the worst. For example, they could trip or fall and loose control of their gun or have an accidental discharge (AD) while performing a magazine change. Just keep this in mind. 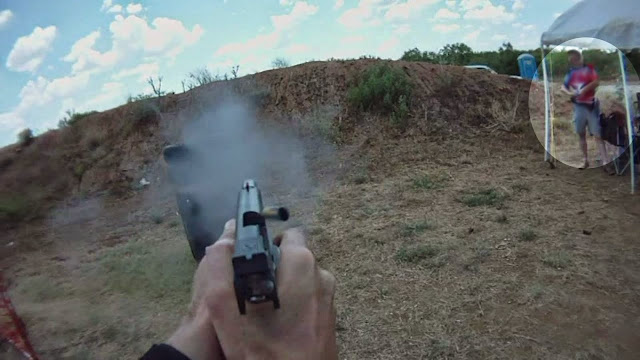 In the video below a shooter is still taping targets when the RO starts the new shooter. Talk about near death!

Email ThisBlogThis!Share to TwitterShare to FacebookShare to Pinterest
Labels: Range Etiquette and Safety